In a previous Post, The Ice Box Challenge Comes to L.A., we explained the Icebox Challenge initiated by Passive House California.

On September 13th at 12:30pm, Passive House California board members Beate Kirmse and James E. Donaldson opened both boxes and revealed the results.

The Title 24 California Code box was actually empty as the remaining ice had melted a day earlier, on September 12th some time in the afternoon. In the other box, the Passive House one, it was the oppositive as there were still some ice left, even after 7 days in the sun. It is worth noting that the temperature inside that box was only 70 ° F, certainly the reason why it kept so much ice for so long. In total 60+ lbs of ice was collected in the Passive House box.

How come the temperature inside the Passive House box was so low?

There are several explanations for that but the obvious one is that it respected all 5 Passive House requirements:

So, contrary to what is thought, Passive House is not just for cold climates. It can also be adapted to the hot and sunny ones like California, Arizona, Nevada, New Mexico and Texas while still maintaining impressive results.

Together for a Brighter Future 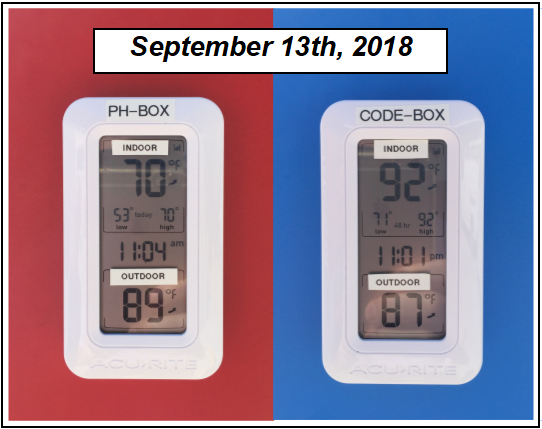